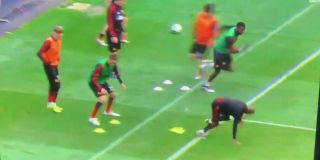 Footage has emerged on social media of Manchester United full-back Ashley Young tripping over a cone during the warm-up before the Reds took on Huddersfield.

As things stand, United lead The Terriers 1-0 at the John Smith’s Stadium thanks to an opening goal by Scott McTominay. Huddersfield goalkeeper Jonas Lossl made a blunder for the goal and allowed the ball to slip through his fingertips.

But it’s Youngy who gets our attention for a month. Usually, in a negative light with sections of the fanbase on social media, this time around we can have a giggle at his expense, which I’m sure he did too!

The coaches were putting the United players through their paces when Young was seen taking a tumble to the surface of the pitch after tripping over a cone.

Young had no other choice but to get up and get on with it, but we doubt his teammates let it slip.

Check out the short clip below of Youngy slipping during the warm-up.

Captain of Manchester United on 🔥 pic.twitter.com/OZ5nc2I16L