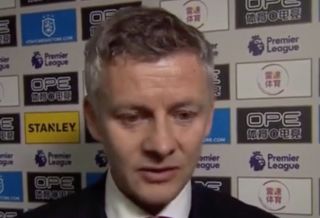 Ole Gunnar Solskjaer has described Manchester United’s shortcomings in the race for top four as a “massive blow”.

The Norweigan took charge of United in December when our season appeared to be over, but over the past few months, Solskjaer had us back in contention for a Champions League spot.

NEXT: Jamie Redknapp warns Man Utd boss: ‘Ole will soon be under a lot of pressure’

We had something to play for but it’s ended in bitter disappointed after a shambolic past month or more.

The football has turned shit, the results are worse… United haven’t been able to catch a break while the teams surrounding them have also been dropping points.

So, today’s 1-1 draw with Huddersfield was the final nail in the coffin. No Champions League football regardless of what happens between now and next week.

Solskjaer doesn’t make any excuses for what’s happened towards the end of this season. We haven’t been good enough and the gap from sixth to the top is far too big to close in one year, especially when you consider the work that needs to be done.

Check out Solskjaer’s post-match interview below.