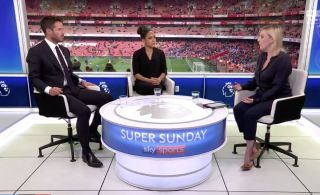 Manchester United’s 1-1 draw with Huddersfield was bitter, to say the least, but the most saddening aspect of it was the lack of hope offered for the upcoming future at Old Trafford.

Ole Gunnar Solskjaer now faces a massive task to turn around what is surely the worst United side of the century thus far, and Jamie Redknapp thinks the pressure could be mounted on him quickly if he doesn’t produce immediate results.

NEXT: Ashley Young reacts to ‘massive blow’ as Man Utd miss out on Champions League

“At times that was shambolic,” Redknapp told Sky Sports.

“Now you want somebody at that club who’s going to know the market to go and buy players, to bring the best out of them, and you’re competing against Pep Guardiola, Jurgen Klopp, [Mauricio] Pochettino.

“My fear is that if next season doesn’t start well, Ole will soon be under a lot of pressure.”

While acknowledging that the start to Solskjaer’s tenure was excellent, Redknapp also points out that the club have not placed him the Norwegian manager in pole position for long-term success.

“I think they’ve got themselves in such a mess,” he continued. “When he took over, everyone thought ‘yeah, he’s a great stopgap’ and the results they had against poor teams were really good.

“But since then, it’s been shown that there are many problems with the players, and I feel they’ve got a major problem next season with buying players there, I can only see more problems next season for them.”

Is Solskjær going to be under too much pressure next season?

"There's a lot of pain to come for United. It's taken Liverpool 29 years to try and win the title again."@ManUtd draw 1-1 at @htafcdotcom meaning #MUFC fail to qualify for Champions League: https://t.co/uGFKxAaINa pic.twitter.com/w8L0osyVGb

The analysis from Redknapp and England international Alex Scott is spot on and will resonate with the pain that the United faithful are currently experiencing.