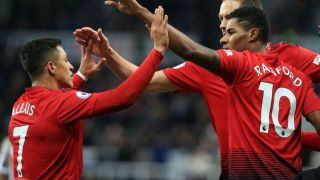 Manchester United face Huddersfield Town at the John Smith’s Stadium in just under an hour.

Ole Gunnar Solskjaer has decided to start Phil Jones alongside Victor Lindelof at centre-back, with an attacking trio made up of Marcus Rashford, Alexis Sanchez and Juan Mata.

We need to worry about ourselves here and nobody else by winning the remaining two fixtures. United are somehow still in with a chance of securing a top four spot, but achieving that at this stage would be some feat.

There’s a chance for Sanchez to make a final good impression before the season ends. His time at the club has been a massive dissapointment and I really hope we’re not watching him in a United shirt again next season.

Spurs lost to Bournemouth on Saturday and hopefully, the teams surrounding us — Chelsea and Arsenal — lose their games today too.

Here are the full team line-ups for Huddersfield Town vs Manchester United (kick off at 14:00 pm GMT):