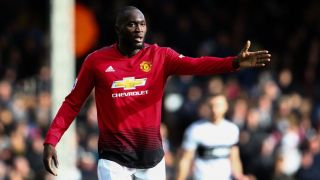 At least five players were missing as the Manchester United squad left to face Huddersfield Town.

The Premier League meeting between the sides will kick off at 2pm at The John Smith’s Stadium, where Huddersfield beat us 2-1 last season, thanks to goals from Aaron Mooy and Laurent Depoitre.

However, Ole Gunnar Solskjaer hasn’t got a full strength squad to pick from and will need to call upon some fringe players or maybe youngsters to stand up to the plate.

Romelu Lukaku and Eric Bailly, who both started a week ago against Chelsea, are ruled out with injury for the match. The underperforming Anthony Martial was also absent and there was no place in the squad for either Marcos Rojo or Matteo Darmian.

Moreover, on Friday Solskjaer confirmed Sergio Roberto was injured and wouldn’t make the match day squad, but Manchester Evening News photographers spotted him with the rest of his teammates. Romero is holding a washbag – looking more than just a travelling companion – and that has the MEN questioning whether he had a late fitness test and passed it?

With Tottenham losing to Bournemouth on Saturday, the Reds still have a slight chance of securing a Champions League spot but we can only focus on ourselves and win our remaining two league fixtures.

We expect to see a few of the younger lads get a run today, such as Tahith Chong.