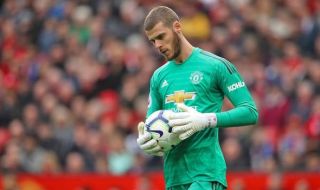 David de Gea has had arguably his worst season for Manchester United, but the fans should still get behind their man between the sticks.

Time and time again he’s come to our saviour, stayed when talk of a Real Madrid switch was almost certain, but now things seem different.

De Gea has conceded goals from avoidable mistakes most weeks over the past month.

It doesn’t seem like his head is in the right place and that may be caused by having his contract dealings dragged by his representatives. United, we must repeat, have already offered to make De Gea the highest paid goalkeeper in football. Sources close to the situation claim Jorge Mendes is demanding more money.

In the video below, De Gea’s best moments of the 2018/19 season are featured – unlike all of the howlers (not that we want to be going back over goalkeeping errors).

But clips like this can help remind us what an amazing keeper we have in Dave. If you can’t support him through the hard times, it should feel wrong doing so during his better times.

Still, he’s our keeper and on his day I maintain the belief De Gea is the best in the world.

Ole Gunnar Solskjaer will hope he comes back for pre-season training in a better state of mind.

United take on Huddersfield Town in the Premier League on Sunday. De Gea is fully expected to start the game, with Sergio Romero ruled out with a knee injury.