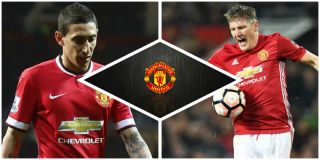 Since the greatest manager of all time hung up his stopwatch and spat out his chewing gum, there has been an almost constant state of flux at Old Trafford. Not just in the dugout but on the field too. 26 players have come and gone in the transfer market, all with varying degrees of success.

Some have flourished, some have divided opinion, there have been a fair few 50/50s and others to have flopped completely.

Here are our five worst permanent signings since Sir Alex Ferguson stepped down six years ago almost to the day. NB: This is just my opinion.

Louis van Gaal became known for a string of bizarre transfers and Morgan Schneiderlin was synonymous with that. Part of the “Scmidfield” pairing with ageing and injury prone Bastian Schweinsteiger, Schneiderlin became a regular with 35 appearances in his first season. The Frenchman was excellent at Southampton but with respect, that was about his level. He was the epitome of van Gaal’s laboured, death-by-a-thousand passes style.  Schneiderlin rarely ventured forward, had no pace or urgency and was much of a muchness. Perhaps predictably, his Old Trafford career petered out, he was never good enough and was instantly forgettable.

Eyebrows were raised when Schweinsteiger came to United but it soon became clear why Bayern had been so keen to let him leave so cheap. His was a classic case of a World Cup winning legend of the game coming to England too late in his career. Schweinsteiger was never fit, too slow and ineffective when he did play. Van Gaal apparently indulged him which caused resentment in the dressing room and his signing did not make much sense. He fell out with Jose Mourinho, and his undistinguished spell at United marked the nadir of his manager’s turbulent two-year tenure at Old Trafford.

Depending on how much onus you put on money paid vs performances, Di Maria could sit even higher on this list. Coming in as a then club record signing under Van Gaal, Di Maria started like the world-class player we saw at Real Madrid. But his form and fitness nosedived, his attitude stank and to this day he is still reviled by a large section of our fanbase for the manner of his departure to PSG after a single season. On reflection, he was merely another commercial, statement signing by the board.  He hit three goals in 38 games, lost his place to Ashley Young and will be remembered as the one that got away.

Widely touted as the European game’s hottest young prospect, Memphis arrived from PSV as United’s latest foreign import in the summer of 2015. Following Di Maria as United’s next number seven, his United career took a similarly downbeat path. The once iconic shirt has become cursed, and Memphis departed to Lyon after 18 months, 53 appearances and six goals. He’s doing well there now but that doesn’t hide the fact that he was another “Galactico” gone wrong. Hefty remuneration for very little reward… and that leads us nicely on to the undisputed number one.

Sanchez not only gets the dubious honour of becoming United’s worst post-Ferguson signing, but arguably the worst ever transfer in the history of transfers. He has stunted the careers of Anthony Martial and Marcus Rashford, knocked several players out of joint and made our entire wage structure top heavy and lopsided. All this while contributing virtually nothing and earning £500k per-week. Catastrophic and yet another previously world class player who has seemed weighed down by the presence of greatness with the #7 on his back. His stock has fallen so far that you wonder if this is an impostor, not the same Sanchez we saw at Arsenal. Four goals in over a year says it all.