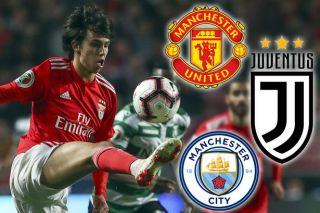 Manchester City have stepped up their interest in Benfica sensation Joao Felix, who has also strongly been linked with a move to Manchester United.

This week we spoke to football journalist Lucas Sposito about the 19-year-old who has took Portuguese football by storm, with some even dubbing him the new Cristiano Ronaldo.

And, if Portugal are about to unveil the second coming to Ronaldo it’s important that United are all over it and do their best to land the player.

According to the Evening Standard, the Reds are eager to get a deal over the line as soon as possible. They know other big clubs will come knocking, which becomes an issue as United are unlikely to secure a Champions League spot this season.

Of course, at 19, Felix has time on his side to get plenty of years at the top playing Champions League football. United are rebuilding and it has the potential to be part of something special under Ole Gunnar Solskjaer.

He has bagged 18 goals and 11 assists in 40 appearances at youth and senior level so far this season. Stats like that make it unsurprising that clubs like United and City are interested.

AS claim Felix has a €120m buy-out clause in his current contract and they note that City are willing to spend the money.

In what comes as another potential blow for the Reds, Record now reports that City sporting director Txiki Begiristain has already met with Felix’s parents.

But there are also reports linking Felix with a move to Serie A giants Juventus, along with his Benfica teammate Ruben Dias, as cited by Juvefc.com.

Given Felix’s age, talent and the excitement such a signing would bring makes it an ideal capture – if United are able to pull it off.

It would be a kick in the stones if Felix ends up at City.