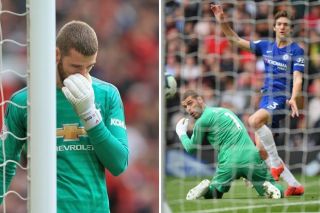 David de Gea is getting it from all corners at the moment. Some are lapping up the fact Manchester United’s keeper, one of the best in the world, is after hitting such a blip.

Former United defender Danny Higginbotham thinks this shows De Gea is human, prone to a mistake like the rest of us, and that his form has not dipped as a result of ongoing contract talks.

NEXT: Man Utd in race with Juventus to secure transfer of €60m Benfica star

De Gea is one of the last players in this side that I’d question for commitment. Most, yeah, I probably would at this stage.

He’s been our rock for years now – winning four of the last five Manchester United player of the year awards, an incredible feat but one so deserving.

The player’s contract expires in 2020 and there has been talk of United watching Atletico Madrid shot-stopper Jan Oblak, as per the Daily Star.

Higginbotham has given his assessment on De Gea’s form (quotes from Tribuna): “He’s having a bad patch. The criticism is out of order. People are always looking for a story that’s not there in my opinion. We see it with so many different players – they go through a bad patch and people say, ‘they mustn’t be happy at the football club. They might want a new contract etc’.

“He’s having a bit of a bad spell at the moment, and because his standards are so high, once he drops below that, everyone starts to question what he’s going through. He’s human and it’s got nothing to do with his contract.”

United have two games left this season — Huddersfield Town and Cardiff City — and it’s likely that De Gea will keep his place. Ole Gunnar Solskjaer is not going to make any unnecessary calls between now and then, as he still probably hopes that he won’t have to replace his keeper this summer.

That would be another kick in the teeth for Solskjaer, losing someone as important as De Gea.

We don’t believe he’s finished at the top but something isn’t right. Perhaps Higginbotham is right after all and he’s just human, though there are times I wonder if he’s more than that.