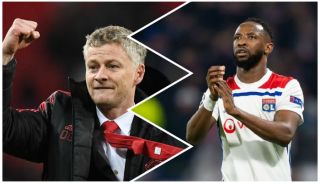 It is suggested in Friday’s copy of L’Equipe that Manchester United are keen to sign Moussa Dembele.

After signing for Lyon from Celtic, the 22-year-old has scored 18 goals along with four assists in his debut season.

Impressing this season, Dembele is not alone, as Ligue 1 has seen the rise of many talents such as Nicholas Pepe and, of course, Kylian Mbappe.

NEXT: Man Utd trying to loan Sanchez out in the summer, offering to pay £13m to make it happen

Thanks to Sport Witness for translating the article, it’s claimed that Ole Gunnar Solskjaer is already working on the deal via intermediaries. That way he will get a better evaluation of the player, however, the feedback thus far is said to have been appreciated by the manager.

Solskjaer has long banged the drum about having players with the right attitude, and as things stand in the dressing room, I don’t think he has a lot to be happy with. There are already players dropping their heads after a brief honeymoon period under the Norwegian coach, but now we should mean business and they’ve gone running in the opposite direction.

According to the report, Dembele is valued at €50 million with four years left on his contract.

This could be United’s answer to selling Romelu Lukaku to one of the Italian clubs this summer.

The MEN claim the Belgian striker is open to joining a Serie A club.