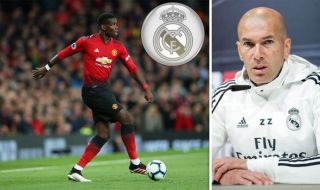 It doesn’t sound like everyone at Real Madrid is keen on Manchester United midfielder Paul Pogba joining the club, according to reports in Spain, as cited by The Metro.

The Frenchman is one of the top names on Zinedine Zidane’s wish list, though Marca also claims that the upper echelons of Los Blancos have their doubts, which puts question marks over a proposed deal whereas their pursuit of Eden Hazard seems a bit more straightforward.

Perhaps Pogba is held in less esteem by the stars of Real Madrid, but Premier League fans won’t want to see the best players in England leave for Spain… that said, I won’t be upset over Chelsea losing their best player!

We should just accept that playing for Real Madrid under Zidane would be ‘dream’ for most footballers, but especially Pogba who has been open about it.

Pogba’s attitude and application of late has left a sour taste on my mouth. After an excellent run of form when Ole Gunnar Solskjaer arrived at Old Trafford, it has completely tailed off more recently and now the finger of blame is being pointed by many at the players.

Although it would be ridiculous to point all of the blame on Pogba, he is United’s main player and it rarely looks like his head is in the right place.

The 26-year-old is easily distracted and we now fear his eyes are completely off the ball with Real Madrid sniffing around.