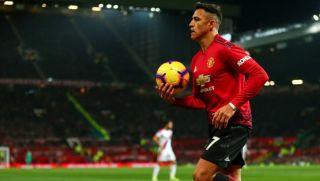 It sounds as though Manchester United will be pulling up trees to get rid of Alexis Sanchez in the summer.

The Chilean has been a bitter disappointment since arriving at Old Trafford in January 2018.

We’ve only seen a few glimpses of what he came to do, but very little… In hindsight, Arsenal sold us a dud and Sanchez now looks finished.

The Daily Mail claim that United plan on paying half of his £26 million worth of annual salary in the summer to see him leave for the season on loan.

That’s £13m towards a player playing for another club, which shows how desperate United are to flog Sanchez – and we’re still awaiting reports to see who might be interested in his signature over the coming months.

This would suggest United think there’s a possibility that getting rid of Sanchez permanently will be too much of an ask this summer, with his ridiculous wages bound to be a stumbling block for any club in the world.

The report above adds that United are not interested in selling Sanchez to another Premier League.

“This morning we want your calls today on Alexis Sanchez.” ☎️

“We want to know if you think he #MUFC‘s biggest ever flop… or is it me?”