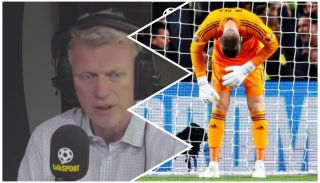 David Moyes has his say on the David de Gea dilemma. To drop or stand by Dave?

David de Gea has been Manchester United’s best player for years. That’s probably one of the reasons why Ole Gunnar Solskjaer has approached his blip in such a way, promising not to drop his goalkeeper and reminding the world what he’s done for the club as No.1.

There’s no debate over who’s been our best player. Only a spoofer will tell you someone other than De Gea. He’s won Manchester United player of the year four times in the last 5 seasons.

But now De Gea is having to deal with heavy criticism which is bound to happen a goalkeeper making regular mistakes. Unfortunately for keepers, mistakes aren’t something they can get away with in games, wheres defenders, midfielders and strikers can let things slip for a moment and still be in with a chance of recovering.

The spotlight shines brighter on a keeper.

Thus, former Manchester United manager Moyes believes De Gea may need a break for the good of the team, in other words saying he wouldn’t tolerate his form of late.

Speaking to talkSPORT, Moyes said: “When you have a number two who is sitting on the bench and you are making mistakes, if you don’t get the opportunity to put yourself in the team I am saying to myself, ‘well, what is the point in having a number two then?’

“David de Gea is the best goalkeeper and has been for years but we have all been players, we make mistakes, and quite often we are left out the team.”

…but you’re there to win and you’re paid very well. You’re not there to make mistakes.”