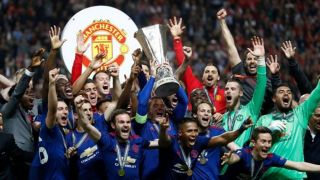 I vowed after our Europa League win in 2017 that I never, ever again wanted Manchester United to be playing against Homer Simpson FC in Baku at 5 pm on a Thursday.

It was fun while it lasted and we won it, but having done so it served a purpose of getting us back into the European elite. It was merely a stepping stone and a necessary rite of passage. Or so it seemed.

Experience trumped youth on that night in Stockholm but how the tables have turned now. Watching this brilliantly dynamic, fearless Ajax side cutting a swathe to the biggest prize of all is both thrilling and hard to stomach. The same Ajax side we beat so comfortably in that final would surely tear us a new one now. They’ve learned their lessons from that loss, grown into the force of old before our very eyes and are everything we used to be. The Amsterdam side are back on an upward trajectory and good luck to them, I’d love them to win it, but in stark contrast, we’ve gone backwards and certainly have not learned our lesson.

Two years on, and here we go again. For the third time in five seasons, United are sitting in the corner of the room watching the other men dine at the top table, drinking the best wine and getting the pick of the single women. No club – not even one bearing the name Manchester United – has a God-given right to play in the Champions League. We don’t deserve to be there based on this season’s shit show, most of our players bar four (Victor Lindelof, Luke Shaw, Paul Pogba and Marcus Rashford) are of Europa League standard anyway and maybe it will actually be the mother of all wake-up calls. There can be no hiding the scale of the task facing Ole Gunnar Solskjaer now. A third successive Champions League campaign would only have papered over the multitude of cracks in Old Trafford’s already crumbling facade.

The draw with Chelsea was surely the final nail in our top four coffin but could it prove a blessing in disguise? Another season in the industrial backwaters of the Europa League might finally wake this board up and make Ed Woodward and his merry band of men realise the extent of United’s root canal surgery. Had we scraped into the Champions League at the last, the money would not have been spent and in the eyes of the hierarchy, all would have been rosy in the Old Trafford garden. As fans, of course, we’re more clued up and know that’s far from the case.

Now the stark reality of missing out on the European elite, and the extravagant riches that come with it, will hit home hard. When that happens, the Yanks act. On the flip side, without the carrot of the Champions League, transfer plans may have to be hastily shelved and revised.

But history suggests that United spend big when there’s no prospect of playing for the cup with the big ears. Louis van Gaal was handed a £300m war chest in 2014-15, when he bought in Shaw, Ander Herrera, Marcos Rojo, Angel Di Maria, Daley Blind and Radamel Falcao (albeit the latter on loan). Jose Mourinho signed Paul Pogba, Eric Bailly, Henrikh Mkhitaryan and Zlatan Ibrahimovic the last time we were in this position.

There are very few positives in missing out on a top four place. Potentially sparing this unfit for purpose United side future embarrasment at the hands of the true elite is certainly one, and having no choice but to make an investment we badly and obviously need is another.

Don’t expect us to be anywhere near a title challenge next term with the prospect of starting our season in July and a Thursday/Sunday schedule. The joy. What’s the Emmerdale theme tune…