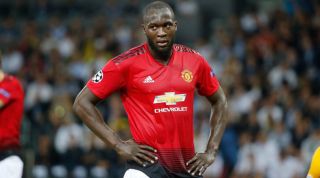 It has emerged from a Manchester Evening News report that Romelu Lukaku is considering his future at Manchester United because of Ole Gunnar Solskjaer’s style of play.

There are growing fears that the Belgian striker won’t suit the system, and there’s evidence to suggest so over the past few months.

Lukaku doesn’t work hard enough and Solskjaer has shown he likes to attack with pace, which becomes an issue when Anthony Martial doesn’t bother to try.

Transfer speculation linking him with a move to Italy is constant, as it’s where he will probably end up, but Lukaku hasn’t been at United very long and seems unwilling to fight for his place. His performances at times suggest that too.

The MEN also claim that Inter Milan are one of the clubs showing an interest in Lukaku. Could that swing out-of-favourite striker Mauro Icardi in United’s direction, with both clubs agreeing on a swap deal of some sort?

Moreover, it’s been a hit and miss season for Lukaku, who has 12 Premier League goals to his name – the most of any player who’s yet to provide an assist in the competition this term.