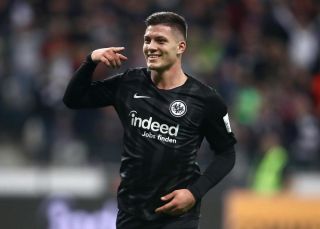 The Serbian has been in outstanding form this season for Bundesliga side Frankfurt, scoring 26 goals in all competitions, including 9 in the Europa League (WhoScored).

NEXT:Man Utd in race with Juventus to secure transfer of €60m Benfica star

Jovic, 21, could act as a perfect replacement for Romelu Lukaku, who is considering his future at Old Trafford because of an uncertain role under manager Ole Gunnar Solskjaer, as reported by the DailyMail.

Lukaku has been poor for the Reds this season, and United fans are now already looking at a new potential striker as the maligned Belgian’s exit looms.

At just 21, Jovic is certainly a player the Reds should be keeping tabs on this summer, as one of Europe’s form strikers.

Many United fans are desperate to see Jovic in a red shirt next season:

2️⃣6️⃣ goals this season
9️⃣ in the Europa League

Luka Jovic is the real deal!

Chelsea go a goal down to Frankfurt and the stadium ERUPTS 🔥 pic.twitter.com/q4yVkj87aA

We should pick the Jovic guy if we have sense @ManUtd

Would love to see Luka Jovic at @ManUtd next season! 🔥🔥🔥

A team i would like @ManUtd to assemble in the coming years. Pace. Power. Leadership. Technical ability. It has it all. Some of these young players will be world class. Chiesa and Sancho will light up our wing for a decade. Jovic our main man. Midfield including the bench 😱😱😱 pic.twitter.com/NIa04R5mK7

Luca jovic should be in @ManUtd transfer list brilliant young talent an will only get better.

Luka Jovic’s finishing skills reminds me so much of the lethal Dutchman Ruud Van Nistelrooy! @RvN1776 @ManUtd pls sign up this deadly striker!