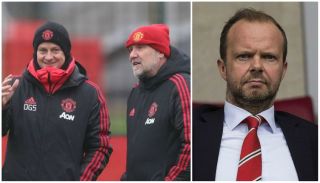 It’s bound to be a busy summer for Manchester United.

With the club looking like it won’t be playing Champions League football next season, the board must get things right this summer to ensure we are not in the same mess a year down the line.

Ole Gunnar Solskjaer came in with fresh ideas and looked to be getting the best out of the players, though they’ve gone back to their old tricks of underperforming so it might just be easier to ship them out and get new players in, who want to be at the club.

NEXT: Why the Europa League could be a blessing in disguise for Man Utd

According to The Express, Solskjaer and his assistant, Mike Phelan have both told executive vice-chairman Ed Woodward that the squad needs an injection of experience as well as young players in the transfer window.

The majority of players United have been linked with are young, however, with some exceptions, it’s clear which areas we lack nous in.

Joao Felix of Benfica and Bruno Fernandes of Sporting Lisbon are two young players that continue to be linked with moves to Old Trafford this season, while someone like Toby Alderweireld, 30, could come in and lend a shoulder to the younger players, perhaps even as a leader.

The fact United have no leaders in the dressing could have led to this decision by Solskjaer and Phelan. You look at dressing rooms of old down the years — Roy Keane, Bryan Robson, you name it — and today’s team makes for a sorry state.