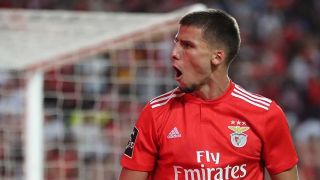 The highly-rated defender has impressed at Benfica this season, which has attracted interest from the Reds according to Portuguese publication the Record, as translated by Sport Witness.

The Reds are one of a number of clubs tracking the future star, who has made 51 appearances at the Portuguese club this season (WhoScored).

Dias has taken the role at Benfica of current United defender Victor Lindelöf, who has settled well after a shaky start at Old Trafford after joining for £31m two seasons ago, as reported by BBC Sport. The youngster could now partner Lindelöf in a new look defence for the Reds next season. There is little doubt among United fans that the club must sign a central defender this summer in what is a key area of weakness that Ole Gunnar Solskjaer should be looking to address.

However, according to the report, the Reds are currently losing out in the battle to Serie A giants Juventus, with talks now at an advanced stage for the player who has a €60m release clause.

The Reds must move fast if they are to secure this deal for the player who has huge potential, with Atletico Madrid also said to be lining up a move for Dias.