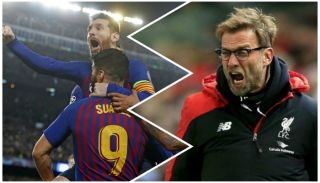 Most called with a sheer sense of delusion, claiming Liverpool were the better side.

How does that work?

Liverpool lost by three goals, scored none and could have conceded six. Ernesto Valverde got his tactics spot on, whereas Jurgen Klopp had a mare starting Georginio Wijnaldum in an advanced role.

NEXT: Solskjaer urged by Man Utd staff to play young star next season

He says Klopp’s side were ‘outclassed in every department’ against the La Liga champions.

Liverpool have an almighty task on their hands to climb back into this season. As things stand, a 4-0 win at Anfield would just about be enough to book a place in Madrid for the Champions League final.

Scoring four goals against Barcelona won’t be easy, but it will be even harder trying to keep Lionel Messi out of the other end. He was outstanding on Wednesday night — netting a brace with one of the goals coming from a superb long-range free-kick.

Speaking on Wednesday night’s Sports Bar after the match, Goldstein said: “A lot of Liverpool fans phoned me up after the United game, when United went to Barcelona and lost by the same scoreline, and rightly so because it was one-way traffic.

“Liverpool fans called me up saying it would be different when they go there.”

“It was worse than when United played Barca. It was more embarrassing.”

“But they all told me that when Liverpool go there it would be totally different, but let me tell you, I thought tonight was worse, I think tonight was more embarrassing.

“Liverpool are a better team than United and Liverpool have got better players than United.

“On the night I saw two totally different performances. I saw a United performance where they had chances early on, Rashford should have scored and it could have been so different.

“But you didn’t see that with Liverpool. Mo Salah missed an open goal and James Milner hit one straight down the barrel at Ter Stegen.

“They were outclassed in every department. I said Barcelona were head and shoulders above Liverpool and tonight they utterly proved it, I thought they were brilliant.”