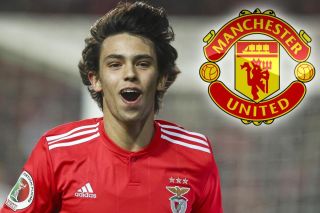 Manchester United will be linked with every promising youngster when the transfer window opens this summer. The Reds need to strengthen in most areas of the pitch, giving agents and the media more to play around with…

One of those areas is the attack. You would be forgiven for thinking this is the last place United need to bolster with fresh additions, but the job has to be getting rid of some of the players we have and buy different players who genuinely want to be at Old Trafford.

NEXT: Why Romelu Lukaku has doubts over Man Utd future

Anthony Martial got his new deal and hasn’t bothered to put in a decent performance since, Marcus Rashford no longer looks himself after a brief honeymoon period under Ole Gunnar Solskjaer, and I wouldn’t bet on Romelu Lukaku being at the club next season.

But the likelihood of missing out on a Champions League spot could come back to bite United in the arse.

The plan this summer is to start the club’s rebuild under new manager Solskjaer. It doesn’t help that we’re going into the transfer window not really knowing where to stand on certain targets. For instance, will Jadon Sancho leave Borussia Dortmund this summer for a team not involved in the Champions League? The 19-year-old is climbing a career ladder and will need to make a big decision on his future pretty soon if he continues ripping up the Bundesliga.

But like Sancho, a new kid on the block is attracting attention from those at Old Trafford, with the Metro linking the Benfica star to United this summer.

Joao Felix has been dubbed the ‘new Cristiano Ronaldo’ by many in Portugal, with the 19-year-old scoring 13 goals and recording 7 assists in the Primeira Liga.

To get more information about Felix, I caught up with journalist Lucas Sposito (@LucasSposito_) who knows a thing or two about Portuguese football. His work can be read from Sport Witness.

The dialogue of our conversation can be read below.

His numbers this season speaks volumes and show clear signs of emerging talent. Is he ready for a move to a big club?

Probably not. First, because he is having his first season in the first team, and then there’s the biggest problem, which is the change of leagues. However, leaving him at Benfica for another season would be a big risk as other clubs can buy him first. So it’s a complicated decision. Maybe buy him now and have some patience is the best thing do to.

What’s his best position? Where would he likely play at United?

He plays as a second striker. But I think today, in United’s lineup, he would end up adapting to the wings. I think he can play both on the right and on the left.

Who does he remind you of, player wise?

This is a tricky response, but it reminds me (and many others) of a young Cristiano Ronaldo. Not regarding potential. But for being a skinny, skilful young man, with incredible ability to create chances with one or two touches on the ball.

Personalities traits? How does he come across in the media?

He seems to be just another boy with potential. I do not see any highlight from the Portuguese media for his stuff off the pitch.

Felix is considered to be Benfica’s greatest talent in recent years. And since he’s still 19, the Eagles are in no hurry to sell. So he will only be signed by some club who want to spend a lot, probably something around €100m.