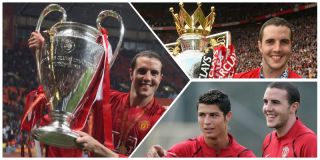 Dubbed as the ultimate utility man throughout his 12 years at Old Trafford, Academy graduate John O’Shea quite literally popped up everywhere. From moonlighting in goal at White Hart Lane – keeping a clean sheet in the process – to nutmegging the great Luis Figo or THAT injury-time winner in front of the Kop at Anfield. The latter alone is enough for any United player to be fondly remembered as a bona fide club legend. Not forgetting that chip at Highbury too.

A man who played in every single position in his time at the club, even as an emergency striker on more than one occasion, O’Shea may not have been the best player ever to don the Red of United but in an era of David Beckham, Ruud, Roy Keane, Scholes, Giggs and Rooney et al, his influence was undervalued. He became a cult hero. Today, on his 38th birthday, and 12 years on from his Anfield heroics, O’Shea – who has been plying his trade at Reading –  announced his retirement from the game after a playing career spanning two decades.

The Irishman won five league titles, an FA Cup, two League Cups, a Community Shield, and in 2008, the Champions League and Club World Cup. One of Sir Alex’s most trusted lieutenants, he linked up with former teammate Wes Brown at Sunderland after leaving United before heading south for his Royal appointment. He was one of those players who never got the credit he deserved but always did a solid job wherever and whenever he was needed.

‘Sheasy’ won over 100 caps for the Republic of Ireland, scoring thrice and playing in two major tournaments for his country (Euro 2012 and then the same tournament four years later in France).

United fans were quick to react to the news on Twitter. And here is that goal in all its glory. Iconic.

John O’Shea is set to retire from football at the end of the season. Here he is scoring a last minute winner in front of the Kop. Iconic. #mufc pic.twitter.com/ab2sHti8Oj

Happy retirement, John O’Shea! A man who has done many great things throughout his career, but perhaps none greater than teaching Jesse Lingard to Cruyff turn. #mufc pic.twitter.com/rIFttGMkXb

John O’Shea has announced his retirement from football. He epitomised everything this club used to be about. Not a world class player by any stretch, but he was committed and gave everything to the club/fans. A team player who played wherever he was told to play!

John O'Shea retires. So many good memories, like the goal against Arsenal – and Liverpool. Goalkeeping against Spurs. Wonderful player ♥