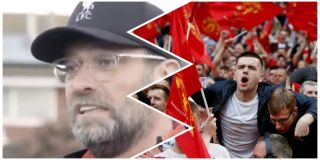 The manager of Liverpool is not going to have much time for Manchester United. And, the same goes vice versa.

Jurgen Klopp reacts with disgust at United fans being present in a short video clip, as seen below.

The Scousers are sure to appreciate the clip, with Klopp’s humourous reaction when he finds out there are Manchester United fans present as he addresses visitors at the training ground.

Liverpool take on Barcelona in the quarter-finals of the Champions League tomorrow night. Let’s hope Lionel Messi and co can make a mockery out of Klopp’s men.

My manager hates the f****** mancs and there’s nothing you can do about it! ❤️ pic.twitter.com/UzcglwvKQa