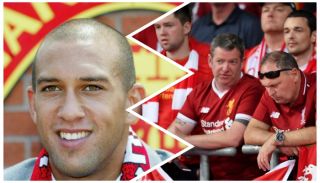 Like the rest of us, this season’s title race has been a nightmare for former Manchester United and Everton goalkeeper Tim Howard.

He knows a lot about rivalries concerning Liverpool having played for the two teams their fans hate most, but the American won’t have fond memories of Manchester City from his time spent at Old Trafford.

“We have two teams in the form that they’re both in. It’ll come down to the wire. If no one has a slip up, then City wins.”

Liverpool face Newcastle and Wolves before the season ends, as well as Barcelona in the Champions League semi-finals.

Howard spent four years at United with Solskjaer as players, with both leaving the club at the end of the 2006/07 season.

“So football’s funny,” the former United keeper continued. “Pundits and fans are funny. He’s the right man for the job. Hopefully they will spend some money and they’ll get his players in and it’s no problem.

“It’s funny, right? Football: He comes in and wins every game for three months and he’s the second coming of Jesus Christ and everyone loves him and then they tear him down and are ready to throw him off the ledge.”

That’s the crazy world of football management. The ultimate responsibility, no matter what the circumstances are…

But Howard is confident that Solskjaer will deliver and bring glory back to United.

“I think for any of those teams in that pack of six or eight teams, I think the idea is to finish in the top four.

“And if you catch good form and lightning in a bottle, and you’re in a title race then it’s all to play for. But right now, I think the idea is for them to get back in the Champions League for sure.”

The Reds run a risk of having to pay over the odds this summer unless something drastic happens and we end up finishing in fourth place and securing a Champions League spot.

And, it looks like we’ll be asking top players to remain patient for a year and to take us back into Europe’s most prestigious tournament.