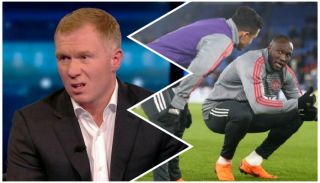 Solskjaer will know that much already from working with the players since December. Being a former striker at United, he knows what standards are required and may need to axe a few players who are not part of his plans.

His former teammate, Scholes believes attacking reinforcements are required at Old Trafford, as well as a centre-half and a right-back.

NEXT: Blow for Man Utd: Two attacking stars could be ruled out for rest of the season with injuries sustained against Chelsea

United have many underperforming internationals on their books, earning lots of money they wouldn’t get elsewhere, so the club will find it difficult to pull off a complete clear out of deadwood.

Alexis Sanchez has been a disaster since joining United last January, Anthony Martial has been lazy again, Marcus Rashford could find himself at a career crossroad if he doesn’t kick on and become a consistent goalscorer and Romelu Lukaku is being linked with a move to Italy.

Scholes told Premier League Productions, as quoted by Goal: “I think it’s a confusing club and a confusing squad of players at the minute.

“We talk about potential with Martial, Rashford, but you’re getting to a point now where it’s not potential, you have to start producing week in, week out.

“Lukaku, I’m not sure if he’s a top-class centre-forward that’s going to score you 30 goals to win you a league. There’s confusion with the forwards.

“There’s confusion all over the pitch. A lack of identity.

“If [Victor] Lindelof can get a tough and aggressive defender next to him, I think they’ll be okay.

“They definitely need a right-back. Ashley Young has done well, converted from a winger. He’s struggled in the last few weeks but mainly he’s been alright over the last few years.”

Out of the four attackers mention, two are likely to leave this summer.

United will cash in on Sanchez if they find a buyer and it doesn’t look like Lukaku will wait around unless Champions League qualification is secured.

The question is what attacking players should United target this summer?