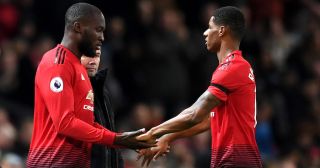 Manchester United have a mountain to claim if they’re to get back into the top four with just two Premier League games remaining.

And now The Sun has speculated that Marcus Rashford and Romelu Lukaku may not play again this season due to injuries.

NEXT: How Man Utd could look next season with five signings recommended by ex-LFC player, including one Chelsea star

Both injuries were sustained in Sunday’s 1-1 draw against Chelsea.

The Sun claims: Marcus Rashford has a niggling shoulder issue while Romelu Lukaku also aggravated his dodgy hamstring in Manchester United’s 1-1 draw against Chelsea on Sunday.

Both had scans and boss Solskjaer is sweating on the pair’s fitness.

Here is tomorrow’s @SunSport back page:

JOY STORY: Pochettino tells his Spurs stars to ‘reach for the moon’ in their #ChampionsLeague semi-final with Ajax. pic.twitter.com/ocxutrcpsS

For starters, I find it hard to believe that Ole Gunnar Solskjaer is sweating on Rashford and Lukaku being fit to face Huddersfield Town and Cardiff City, especially with the top four looking out of reach.

Neither are scoring goals at the moment, so this could be an opportunity to give Mason Greenwood another run in the side. He deserves it after scoring 30 goals for United’s youth team this season.

Solskjaer can also turn to Alexis Sanchez, who yet again was ineffective as a sub in United’s most recent outing, showcasing what we’ve seen of him since arriving over a year ago. The Chilean has two Premier League goals to his name this season, a sorry statistic for any forward.

As for Anthony Martial, it depends on whether he can be arsed to do a bit of running… See below.

Anthony Martial ‘warming up’ for United’s draw with Chelsea

What do Martial FC have to say about this? 🤔🤔🤔pic.twitter.com/CZu6BQSPFc