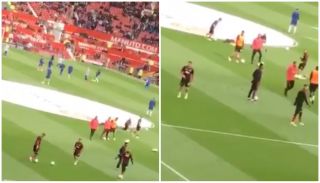 Ole Gunnar Solskjaer said it was a must-win game for the lads, anything but a win would result in United not qualifying for Champions League football.

NEXT: Gary Neville explains how missing out on Champions League will cost Man Utd

Marcos Alonso took advantage of a poor mistake from David de Gea to equalise after Juan Mata had put United ahead.

The Reds remain sixth in the Premier League after drawing with Chelsea, who are fourth with 66 points, while Tottenham are third on 70 points.

United (65) are just one point adrift of fifth place Arsenal (66), so we need results to go our way with just two remaining for each team.

However, some footage is being shared amongst United fans focusing on how Anthony Martial didn’t warm up before the Chelsea game.

No wonder he was left on the bench for the entire game.

In the clip below, you will see Martial looking incredible inactive as his United teammates prepared for kick-off.

He appears to be doing nothing.

Martial working hard in the warm up pic.twitter.com/8H9k6MlDDt

I was at the game and watched Martial warm up. He couldn’t be arsed and just stood there for ages with his arms behind his back.

We saw this too. We watched him half heartedly do the dynamic warm ups by the corner flag and then he stood there for several minutes doing jack shit in the middle of the pitch