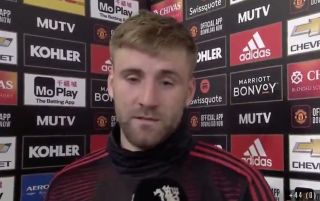 Luke Shaw was critical of Manchester United’s finishing against Chelsea.

This could be seen as a possible dig at Romelu Lukaku and Marcus Rashford up front and it would be great to finally see some of the players call one another out.

Shaw doesn’t mention any names but you will see in the video below but stresses that United were wasteful, which is nothing out of the ordinary.

NEXT: Gary Neville explains how missing out on Champions League will cost Man Utd

Lukaku missed a good chance early on, though his excellent chipped pass found Shaw in the lead up to Juan Mata’s opening goal.

His partner up front, Rashford, had a more difficult evening. Not one to remember…

Shaw sounds genuinely frustrated with the result against Chelsea. It doesn’t do our top four hopes any good.