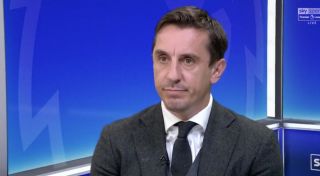 Manchester United are likely to spend a season out of the Champions League after falling short in the race for top four.

That could potentially ruin plans for summer recruitment when top players want to be playing in the Champions League every season.

Gary Neville argues United are still attractive but may need to start spending even more to attract certain players who expect to be playing at the top of European football. That’s why Ole Gunnar Solskjaer must ensure his squad doesn’t flop next season.

Europe’s second-rate competition, the Europa League, might make it more difficult in the summer market (even though United have plenty of issues stemming from Ed Woodward also).

Speaking on Sky Sports, Neville said, as quoted by Yahoo: “I think when players are choosing their clubs they obviously want the team to be competitive, wanting to win trophies and to be in the Champions League.

“For Ole Gunnar Solskjaer it will be a really big ask from where they are now to winning the Premier League. So if you were choosing between two clubs on a like for like salary basis you might choose other clubs.”

However, Neville doesn’t believe it’s a catastrophe market-wise: “What I think will happen is United are a rich club and have a huge amount of revenue and it will just cost them more. They will get players as it is still a huge attraction for players to come and play for a huge club, an amazing club, and it just means it will cost them more ot get the players they want.

“That’s where you don’t want to be; you want to be in control. For 20 years this club had this perfect situation where they were strong enough to lose players knowing they wouldn’t upset the rest of the squad and cause disruption, but they are not in that position anymore.”

Can Man Utd still attract the top players in the transfer market? @GNev2 gives his thoughts.

Nev is very good when talking about United and adding a strong fans perspective to the mix, as well as ex-player and pundit. The complete package.

The Europa League has been good to us in the past – winning it in 2017 against Ajax in the final – but with our plans for the future set on going back to the top of England and European football, Solskjaer should consider using the Europa League for fringe players and youngsters.