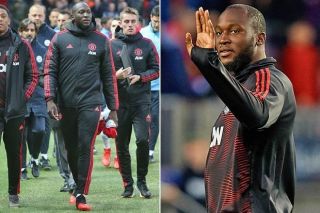 It wouldn’t shock many fans if Romelu Lukaku left Manchester United this summer.

The striker has struggled for form all season and doesn’t appear to be the right front man to lead Ole Gunnar Solskjaer’s side.

Asked if he would stay at United beyond this season amid rumours, Lukaku said, as quoted by Goal: “I don’t know, I am not here to entertain rumours. I am still under contract.”

A fair response before the transfer window opens, but Lukaku has been strongly linked with a summer move to one of the Italian clubs.

Gets a lot of slack but the fact is he is a good striker who just doesnt get good service at united.Much better than that overrated clown lingard .if he’s willing to put a shift in for the club and get fitter during the summer well and good or else not a big deal if he goes lol

The Belgium international also defended teammate David de Gea, who is having a tough time between the sticks: “He has been the best player at the club since when? Seven or eight years consistently. I don’t think we should discredit him and suddenly say he is a bad goalkeeper. He has saved us so many times. It happens to strikers, it happens to midfielders and now it is happening to him. He has to learn from it. We are here to support him and he is strong.

De Gea just needs to go on holiday now. Let him off early and play the kids for the last two games. Sod all to play for, so it’s got to be done.

Sort out Daves contract & get rid of the dead wood. Then Big D can hit the new season with a new hungry squad.

“He had a bad time at the start of his United career as I remember and he was just a kid then but came through it. He did what he had to do then, turned it around, won trophies and became the best player at the club and he is a leader in the dressing room. Now it is up to us as a team to help him and trust his abilities.”

Of course, Lukaku is not alone banging this drum on De Gea. The Spanish shot-stopper has the backing of his manager and the rest of his teammates to bounce back and show he’s one of the best goalkeepers in world football.