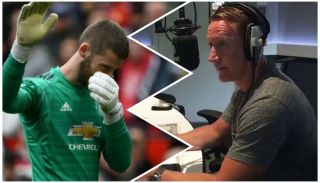 David de Gea is going through a rough patch at the moment and people are debating whether Ole Gunnar Solskjaer should drop his first choice goalkeeper, with Argentina international Sergio Romero available on the bench most weeks.

With two more games to go this season and top four looking unlikely, is there any point dropping De Gea now and potentially creating a bigger issue?

Graeme Souness said on Sky Sports that United would lose De Gea if Solskjaer decided to drop him after this bad spell. For all the times he saved the team in the last few years, shouldn’t United stand by their man, showing appreciation for his many heroics between the posts.

He told talkSPORT, as quoted by Tribuna / MU Live: “Man United against Tottenham at Wembley (1-0). What a performance! He captained the team and they won the game. There have been many occasions when he saved Manchester United.

“Recently, the last few games, he has made really bad mistakes. It’s a real tough one. He [Solskjaer] knows, he sees him every day in training. He knows his confidence must’ve been hit. When a goalkeeper makes a mistake, I’m afraid that’s a goal. Everybody makes mistakes. Forwards make mistakes when they miss penalties or open goals.

“I don’t think he should be rested. They’ve got to play him till the end. He’s massive for Manchester United. Now Solskjaer has to look at his squad. They need to bring more players in and get rid of a few. Certainly David de Gea won’t be one of them.”

We’re all behind you, @D_DeGea – show some love for our no.1! 💪 pic.twitter.com/U0SzkdRUT9

At first, I thought it might be a good idea to take him out of the team for a week or two. Lacking focus and confidence, he’s currently short the player he was, but to suggest he is finished at the top would be daft.

Still, it would be great if he stayed next season and got back to his peak performance levels which make him the best goalkeeper in the world. Now – it would be a push to suggest that.