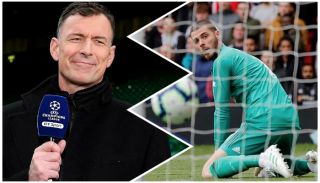 De Gea has been the subject of criticism over the past month after several costly mistakes led to goals for the opposition. His latest, coming on Sunday against Chelsea, has sparked a greater debate about whether he should be dropped for the last two games of the season.

An early break could do De Gea good to allow him to sit down with the club and his representatives to make a definite decision on his future. Though dropping him could trigger the opposite sort of response, with the Spain No.1 potentially pushing for a move elsewhere.

That will come down to Ole Gunnar Solskjaer’s judgement, although the manager made it clear during Friday’s press conference that he would continue to back De Gea.

Sutton wrote in the Daily Mail: “I used to do my homework on the goalkeepers I was going up against, to see if they had any weaknesses. I would know Newcastle’s Pavel Srnicek might take a chance when he had the ball at his feet, for example. I would also know if they were not comfortable at collecting crosses.

“Strikers going up against David de Gea will know fine well that he has made errors. They will know his confidence is down and that his eyes appear to have been taken off the ball. So opponents will want to test him and shoot from distance, just as Antonio Rudiger did in the build-up to Marcos Alonso’s goal.”

But this is not the first time De Gea has come under scrutiny at United. In 2011 after signing for the club and immediately replacing Edwin van der Sar, the former Atletico Madrid goalkeeper felt the wrath of English media, with a view Sir Alex Ferguson had made another transfer blunder on a keeper.

Fergie struggled for many years to replace Peter Schmeichel, but he stood by De Gea while deciding when the time was right to give him a break with Anders Lindegaard part of the squad.

Eight years on, we’re talking about someone who has been United’s best player for a very long time, arguably keeping us in the top half of the table at the end of several seasons.

I don’t think anyone is saying De Gea is finished at the top level, but De Gea’s World Cup form a year ago can suggest a dip in form has been coming. There were calls in Spain to drop him during the tournament too.

Huddersfield Town and Cardiff City will target the out-of-form goalie if he starts United’s remaining fixtures. We hope De Gea can bounce back like he did at a much younger age. He’s 29 this year and will want to retire with more domestic titles and European honours on his CV.