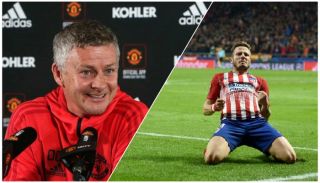 Manchester United could look to trigger the release clause of Atletico Madrid goalkeeper Jan Oblak before David de Gea’s future is solved, according to ESPN.

Oblak’s buy-out clause is said to be worth a whopping €120 million. If United are to pay that this summer, it won’t be to have Oblak on the best while De Gea starts every week.

This may suggest United have made a decision on De Gea, to pull out of talks with his entourage, who demand more money than what’s been tabled by the club.

De Gea is also going through a difficult stage in his career, committing mistake after mistake, and people are beginning to debate whether Ole Gunnar Solskjaer should consider dropping his Spanish goalkeeper?

Ex-Gunner Ray Parlour weighed in on the debate this morning on talkSPORT, arguing that De Gea doesn’t need a rest and that United should stand by him.

Oblak is two years younger than De Gea, but we’re talking about a shot-stopper who has won Manchester United player of the year in four of the last five seasons. Binning De Gea now would be a huge risk, even if we’d be replacing him with one of the other best goalkeepers in the world?

ESPN adds that Oblak is in a similar situation to Atletico teammate Antoine Griezmann in that he wants to see top players arrive in order to help them challenge with Barcelona in La Liga. Real Madrid are also likely to strengthen in the summer, with Sky Sports claiming they are confident about landing Premier League duo Eden Hazard and Paul Pogba.

But would these players leave Atletico for a club unlikely to be playing Champions League football next season?