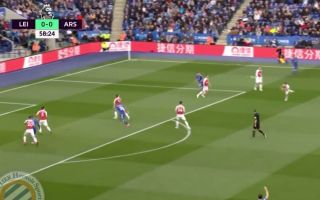 Sunday could get off to a perfect start if Leicester City can hold onto their lead against Arsenal.

It’s 1-0 thanks to a superb header by Youri Tielemans and it would be fair to say the Foxes deserve to be winning.

Arsenal are not in the greatest of form and could risk losing out on a spot in the top four if the score remains the same.

But yet again, Arsenal’s defending is subject to error.

A dangerous player like Tielemans shouldn’t be left roam into the box on his own. He didn’t even need to challenge for the ball, it was all his and ready to be buried past the goalkeeper.

The Daily Mail recently ran a report claiming United were interested in signing Tielemans this summer, with the AS Monaco midfielder, on loan at Leicester, valued around £40million.

Manchester United host Chelsea in the Premier League later today in a game that could sway fourth place in one direction with so few games remaining.

The Reds go into the game short on confidence after some abysmal performances and results of late. Ole Gunnar Solskjaer knows it’s win or bust for his players against Chelsea, who can only qualify for the Champions League by winning the Europa League.

Arsenal share the same alternative route into Europe’s most prestigious competition, but only one of them can win the Europa League.