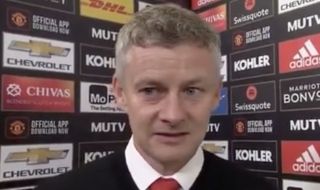 Manchester United failed to capitalise yet again on their top four rival slipping up as they were held to a 1-1 draw to Chelsea at Old Trafford.

Ole Gunnar Solskjaer stated in his programme notes that this was a must-win game to maintain hopes of Champions League qualification but his side failed to find a winner in the second half, all but confirming Thursday night Europa League football next season.

Juan Mata opened the scoring early on after an excellent move involving Luke Shaw and Romelu Lukaku. Solskjaer’s side looked comfortable going in with a lead at the break before David De Gea made yet another howler, this time failing to deal with Antonio Rudiger’s long-range effort before Alonso sneaked in to equalise.

However, United failed to sustain anywhere near their pace of play in the second half and rarely troubled Chelsea’s defence.

NEXT: Eric Bailly’s season could be over after suffering bad knee injury against Chelsea

“You never know, we felt we needed to win this game. The boys started fantastic, created chances, got in behind and got the lead and then second half we never managed to get the quality and tempo back up again,” Solskjaer told the BBC.

“It was a good game of football, both could have won it but probably a draw is fair result. They’re probably more happy than we are with the draw, it’s one of those days and we must dust ourselves down and win the next two – you never know as points are being dropped left, right and centre.”

Asked if he should have left out David De Gea, Solskjaer said: “No. David has been a fantastic keeper at this club, his reaction after City was good and I was confident in him. He knows he could do better with their goal but it’s one of those things again.

“We did the same against City and started well but today we never found our rhythm again. We needed the tempo to be higher, with a higher intensity but we never managed to get that.”

Solskjaer also confirmed Eric Bailly will now be out for the rest of the season after sustaining what appeared to be a serious knee injury.

Solskjaer’s men now look to have let their hopes of a top four finish slip with Chelsea are now in pole position to secure the final spot with just Watford and Leicester to play.

The Reds must now beat Huddersfield and Cardiff in the two remaining games and hope for a huge helping hand from their rivals.