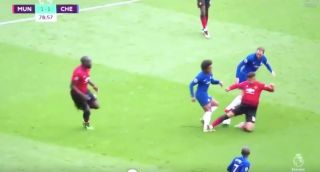 Marcos Rojo was very lucky not to have been sent off against Chelsea.

The Argentine replaced Eric Bailly in the second half after the Ivory Coast international suffered a bad knee injury, and Rojo almost forced another player off the pitch with a reckless challenge.

NEXT: (Watch) Alonso takes advantage of another De Gea mistake to make it level at the break

Chelsea winger Willian had the ball at his feet and was trying to get around several bodies before Rojo took him to the cleaners.

He didn’t think twice about it and ended up receiving a yellow card for his efforts, when in fact he deserved to see red.

We’ll take it. After Bailly’s injury, we could do without having another defender missing for the remaining fixtures.

United still got the refs in their pocket. Disgusting from Rojo. Only a begrudging yellow card from Atkinson. pic.twitter.com/dvZPPjaehK