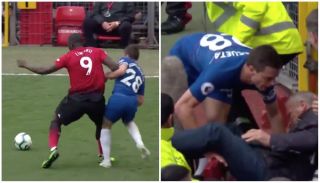 Romelu Lukaku may have missed a sitter at the beginning of the match, but the Manchester United striker looks up for the occasion against his former club.

The 25-year-old played Luke Shaw in for an assist with his beautifully chipped pass, though he will now hope to make sure United take their lead back.

A mistake by David de Gea saw Chelsea equalise through Alonso, who had an easy finish to level the scoring before half-time.

But there was another incident prior to Chelsea’s equaliser.

Cesar Azpilicueta contested with Lukaku for a wall and was sent to the shop with orders.

The United striker barged him off the pitch and into the bottom row where photographers work.

The Chelsea defender was unharmed after the collision.

Watch Lukaku’s shoulder on Azpilicueta below.