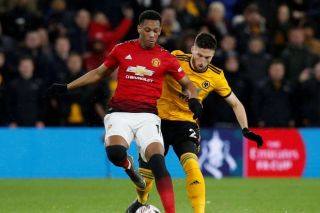 What has happened to Anthony Martial since he signed a new deal at Manchester United?

In his last 10 games for the club, Martial has only scored one goal, which shows the struggle he’s facing.

This is not the player we watched brimming with confidence, making defenders scared by running directly at them with pace and cutting in from the left wing to score goals.

After signing his new deal, lasting until 2024, Martial’s form nosedived and now is a time when fans aren’t holding from criticising the players after some shocking overall performances recently.

They must all get together and come out of this stronger as a team but the games are running out, and our chances of finishing in the top four will be even slimmer unless United manager to beat Chelsea later today.

Anthony Martial scored twice in the reverse fixture against Chelsea – the only Man Utd players to score home and away #PL goals against the Blues in the same season are Wayne Rooney in 2011/12 and Eric Cantona in 1992/93#MUNCHE pic.twitter.com/Xldiu60odl

And, Martial is one of those players we need firing for United to be at their best.