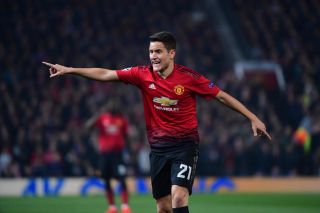 It’s a must-win game for both Manchester United and Chelsea in the race for the top four.

United fans are hopeful the Reds can get a better result than they did at Stamford Bridge before Christmas when we came from behind by scoring two goals before a late equaliser from Ross Barkley meant both teams walked away with a point each.

Chelsea are three points better off than United. The blues are sit in fourth and need a win for that to remain the case, though Ole Gunnar Solskjaer men should have something to say about that.

If United beat Chelsea, we will move above Maurizio Sarri’s men on goal difference, whereas the London outfit could surpass Tottenham in the standings if they win at Old Trafford.

Photographers from the Manchester Evening News were on hand to watch the squad arrive at the Lowry hotel, with both Ander Herrera and Eric Bailly returning to the squad.

Herrera has been out with a thigh injury, while Bailly’s situation is a bit more unclear due to falling down the pecking order at the club.

Solskjaer tends to stick with Victor Lindelof and Chris Smalling as his preferred defensive partnership and we’ll be expecting the same again today unless he opts to throw Marcos Rojo into the mix.