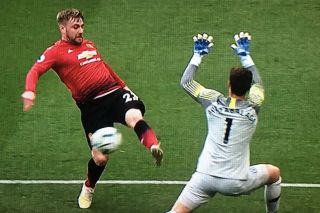 Luke Shaw this season has become a regular at Manchester United. About time perhaps, but we always knew he had quality about him.

He had a number of things that needed to be addressed and it’s a credit to himself that he got his career back on track when it could have easily slipped away.

This season also saw Shaw back in the England fold when last summer Gareth Southgate brought Ashley Young instead.

But a stat has emerged from @StatemanDave on Twitter and it shows another area of Shaw’s game that has improved this term.

Luke Shaw has more Premier League assists this season (4) than he did in his entire league career before this season (3).

That driving run to get into the box…🔥 pic.twitter.com/jDkjdyAncn

Solskjaer did say after he came in that Shaw needed to get forward more.

Well, he did exactly that for Juan Mata’s opener, running onto a wonderful pass by Romelu Lukaku inside the box before laying the ball off to his Spanish teammate to register a fourth league assist of the campaign.

The scoreline remains 1-0 as we approach half-time…