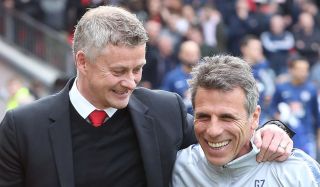 Two points dropped against Chelsea. That is how we see Sunday’s result at Old Trafford.

On the weekend both Arsenal and Tottenham drop points in the race for a top four finish, it’s a shame United were unable to take advantage by securing three points for themselves.

NEXT: Eric Bailly’s season could be over after suffering bad knee injury against Chelsea

While finishing in the top four is not mathematically impossible, I can’t see United or Arsenal making enough ground on Spurs or Chelsea with just two games left.

Chelsea will see it as a good point picked up on the road, but they really need to sort their striking situation out; not that United were any better.

David de Gea will get plenty of stick for the howler that led to Alonso’s equaliser.

Below is a collection of reactions from the game via United fans on Twitter.

Top 4 is done. These players have had countless opportunities to show they care about where this club goes next season and we’ve failed. The fans care way more than this club. The silence at full time shows that. Not good enough and anyone who says it is good enough, is a liar.

Top four is gone, but without De Gea, even in a poor season for him personally, we’d be fighting Wolves and Leicester for 7th.

Disappointing. Don’t like blaming De Gea cause he’s singlehandedly saved us year after year, but why he hasn’t been dropped is beyond me. He’s costing us points on a regular basis. Romero is a brilliant back up, play him.

Frauds! Get out of my club the fucking lot of ye!

Gonzalo Higuain might as well just retire with how he’s looked this season. His display today was quite simply embarrassing.

Uninterested, out of shape and lazy – 3 ways to perfectly describe Gonzalo Higuain.

Not sure why everyone is arsed with top four. We have no chances of competing in the Champions League anyway and it would only keep the Glazers happy. Might as well enjoy some fine away days in remote locations in Eastern Europe instead.

Thoughts today: losing Herrera is a major blow. And why are United so unfit? They can follow a gameplan for 35 mins and then run out of steam. It’s the basic requirement and Mourinho and/or Utd conditioning staff have much to answer for on that.

Any fucker having a go at Spanish Dave needs to have a word. Carried us for 6 years, dismantled by a bunch of spineless cunts. Up the fucking Spanish Dave 🇪🇸

That mistake from De Gea did cost us the result. But there was 45 mins to manage that game afterwards. That 2nd half showing was an abomination.

Let’s have it right, Rojo is a fucking nipple. Doesn’t give two fucks about United. Nothing hard about what he does either. He’d cry his arse off if he was on the receiving end.

Not angry just disappointed, massive opportunity missed. This £200m+ better be spent well, this summer window defines the next decade.

De Gea completely fucked us with that mistake. Let Chelsea off the hook and the whole second half a complete scrap.

Mata and Herrera made a difference.

Bailly the full reportoire of looking good, being rash as fuck and being made of glass. Sell.

Lots of players underperforming/not good enough. Having to stomach Liverpool/ City chasing the title and who knows what other trophies. Probably finish 25+ points off them which is horrid. Europa league is beckoning. Wish the season could finish and the rebuild start now tbh.

Fucking annoying game. Didn’t do enough to get the three points. But De Gea gave them their only goal. Chelsea looked so average. Can’t believe we are finishing below a team like that.