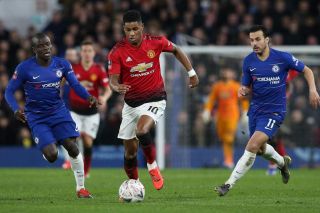 Manchester United welcome top four chasing rivals Chelsea in our penultimate home game of the season as the high profile fixtures continue to come thick and fast. Despite recent form and three league losses in four, Ole Gunnar Solskjaer’s side are – somehow – still in contention for the fourth and final Champions League qualification place. If the Reds are to get into that coveted position, three points against the current incumbent is a must.

After this tie, United have two games left against the fodder of relegated Huddersfield and struggling Cardiff City.

Maurizio Sarri has endured an indifferent first season at the helm of the west London side but still has hopes of landing a major trophy having taken Chelsea into the semi-finals of the Europa League. The Blues are in the driving seat of the strangest top four scrap for many a year, but victory at Old Trafford would see Solskjaer’s men move level on points with Sunday’s opponents.

If United fail to get a result, then we almost certainly will not be challenging the Champions League fixture gurus next season, and what then for Solskjaer’s chances of attracting the top talent required at Old Trafford? United are unbeaten in their last five against Chelsea at home with the Blues last Old Trafford win coming back in May 2013.

Opposite number Sarri was sent off in Chelsea’s draw at Burnley last time out, and could he be sent packing by the club’s hierarchy in the summer? Maybe winning the Europa League might save him?

David de Gea will keep his place in goal despite recent errors, and United midfielder Ander Herrera could return after missing six games through injury, according to BBC Sport. Phil Jones and Scott McTominay missed out in midweek and are again doubtful.

With his goalkeeper in the midst of the worst run of form of his United career, Solskjaer backed De Gea: “I trust David. He’s, for me, been the best player United have had for the last six, seven years. He’s been absolutely outstanding. Going through tough patches is just part of a footballer’s career. David will be fine, no worries.”

For Chelsea, Callum Hudson-Odoi is a long term absentee and key midfield enforced N’golo Kante is a doubt after being forced off against Burnley.

All eyes are once again on Paul Pogba, with the United man being the only player not from Liverpool or Man City to be included in the PFA Team of the Year following an inconsistent campaign of peaks and troughs. His controversial selection in the XI came at the expense of Chelsea’s star man Eden Hazard, who has been central to everything with 19 goals and 13 assists during another stellar campaign in west London.

United and Chelsea are both 17/10 to claim the honours, with the spoils to be shared a good price at 12/5 with Betfair.

You can catch the Reds heavyweight contest with the Blues live on Sky Sports as part of Super Sunday at 4.30pm.