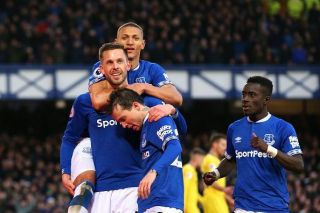 Manchester United have pinpointed Everton’s Richarlison as a potential target ahead of the summer transfer window, according to the Telegraph.

This will be Ole Gunnar Solskjaer’s first summer in charge of United and he’s never been in a position like this before. The likes of Molde and Cardiff City wouldn’t be targetting the same players as United, so he must come to terms quickly with how the transfer market works at the highest level.

Many are of the view this is why a director of football is needed. It would certainly help to have a football brain running the ship rather than some puppet banker, like Ed Woodward.

NEXT: How Man Utd missed out on signing Liverpool’s Virgil van Dijk

United aren’t desperately seeking a forward player but Solskjaer needs to do something about his misfiring stars in attacking positions. Marcus Rashford showed a brief spell of solid form but has yet to prove himself as a 20+ goal per season striker, whereas it wouldn’t surprise us if Romelu Lukaku called time on his United career.

That opens the door to a potential striker signing and recent reports have us linked with Richarlison, who scored in Everton’s 4-0 win over United last weekend.

According to Jason Burt, writing the exclusive for the Telegraph, although Jadon Sancho of Borussia Dortmund is United’s prime target, there have been discussions within the board about approaching the Toffee’s for Richarlison.

The Brazilian, who set back Everton £50 million following his transfer from Watford, as per BBC Sport, would be a cheaper alternative to Sancho. Though United shouldn’t look at their business this summer that way, trying to budget or penny pinch. There’s a reason we’re behind and it’s important to get things right in the upcoming transfer windows.

Moreover, Everton won’t give Richarlison up too easily.