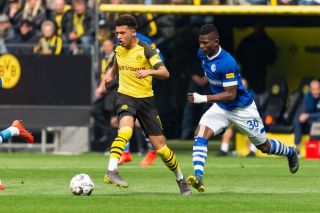 The England international, 19, has impressed fans everywhere this season during what has been an incredible breakthrough campaign.

He has become a key player for Dortmund while running Bayern Munich close for the Bundesliga title, though as things stand they won’t be overtaking last year’s champions anytime soon.

There are under 30 minutes remaining in BVB’s league fixture with Schalke, with Mario Gotze’s opener cancelled out with the visitors scoring three times since. But it Sancho who set the former Bayern playmaker up for his goal.

Lucien Favre deserves credit for trusting Sancho and getting the best out of him as a young player. Today, the winger bagged his 14thleague assist of the season, one more than any other player in Europe’s top five leagues.

The Dortmund manager won’t want to lose his star player anytime soon, but he will be aware of interest from around Europe. The Daily Mail claim Real Madrid are considering a move for the former Man City youth player, with United still monitoring the situation.

Sancho amassing 14 assists means that he becomes the first Englishman since Chelsea legend Frank Lampard to get at least 14 assists in one season in Europe’s top five leagues. The sort of feat that warrants interest from clubs like Manchester United.

14 – Jadon Sancho has assisted 14 Bundesliga goals this season, the most by an English player in one of Europe's big five leagues since Frank Lampard also assisted 14 in the Premier League in 2009-10. Superstar. pic.twitter.com/mEX9M6cysm

BVB still have more games to play this season, so it’s likely that Sancho will add to his tally, but we’re definitely talking about an exciting prospect here… And United should be doing all they can to bring him to Old Trafford this summer.