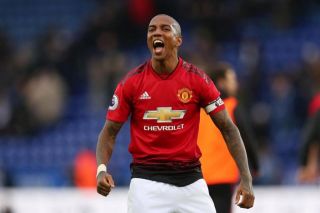 The full-back has come under criticism of late for bad performances. At 33, he’s one of the older players in the dressing room and was recently given a new contract at the club, which left a number of fans scratching their heads.

Ole Gunnar Solskjaer has a preferred age profile for his targets this summer, but he will know a squad takes all sorts. It’s important to find the right mix of youth, experience and other key traits needed to build a successful football team.

Young has been around the block for years and some of the younger players could learn a thing or two from him about always putting in a shift.

But when it comes to the United dressing room, I find it difficult to identify any leaders. Young says there are many but we’re not buying it…

Speaking to Sky Sports, he said as per Goal: “You’ve got to when things aren’t going well. You can only imagine what’s been said in that dressing room but he stays with us. I know what the strength is, the characters in the dressing room, the spirit in the team we’ve got here. I know everybody wants to win those games and finish the season in the top four.

“There’s going to be a lot of people turn around and say they know the club but when you’re in it day in, day out, they’re the ones that really do. Everybody is entitled to their opinion. But there’s so many leaders in this team.”

Maybe there’s too many “leaders”. We need ONE captain who plays/leads by example and has earned respect of his teammates and supporters. Can’t think of a single candidate in the current squad

It’s like the blind leading the blind most weeks.

I’m sure there are players renowned for picking one another up, but there’s no leader in the current team that gives us any winning edge.