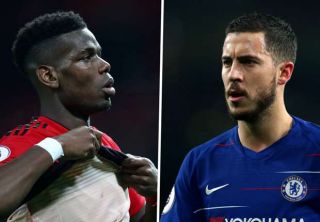 Real Madrid are confident of landing Premier League duo Paul Pogba and Eden Hazard his summer, according to Sky Sports.

The Spanish giants are expected to spend big this summer as Zinedine Zidane begins his rebuilding job, which the club’s board will hope can take Real Madrid back to European glory and domestic success.

Pogba has received criticism all season long, but the French midfielder still made the PFA team of the season, becoming the only non-Liverpool or Man City player to do so…

It’s been a hugely disappointing season for Los Blancos, with Zidane’s return making him their third manager of the campaign after sacking Julen Lopetegui and Santiago Solari. Next season they will be hoping for more stability and success.

Zidane and co must believe these two Premier League big hitters are missing pieces to their jigsaw.

Moreover, Gary Neville gave an honest assessment of Pogba on Sky Sports before the Manchester derby on Wednesday night: “I don’t think he wants to be here, that’s his problem. His agent is into him. He’s done brilliant for Ole, by the way, scored 11 goals and made seven assist or so.

“I thought a few months ago that everything was brilliant, but I said that I believed the issues would resurface. We know his agent, we know the influence he has, and he’s had his head turned by other clubs.

“He’s playing like somebody who doesn’t quite want to be here. But a player who doesn’t want to be at the club, and has a big influence in the dressing room on the likes of Lingard and Rashford, if he’s not at it, it’s a massive problem.”

And, if you think Neville was sticking the boot into Pogba, you’ve seen nothing yet.

Roy Keane took it to another level as seen in the video below.