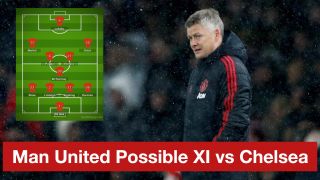 Seven losses in nine have constituted what may have been the worst possible outcome from the most important part of Manchester United’s season. Scott McTominay’s goal against Wolves on April 2nd was the only one scored this month from open play as Ole Gunnar Solskjaer’s side gave their FA Cup and Champions League hopes away.

Despite throwing almost every match in recent memory, though, United have arguably one more chance at the Premier League’s coveted fourth position in the form of a difficult home tie against Maurizio Sarri’s Chelsea. Unfortunately, Solskjaer is tasked with choosing a lineup of eleven players for this key fixture in a squad where almost none are showing any semblance of form. As such, it is almost impossible to predict a side that is both tactically and logically likely to start the match, but something resembling the following seems the most likely.

The abhorrent patch of form endured by the Spaniard seems to have come out of nowhere but given that it is his first in almost six years, the normally reliable United icon should be trusted for what is a huge game of football.

Considering Ashley Young’s decline as a footballer in all phases of play, and Diogo Dalot’s understandable struggle to adapt to both senior and Premier League football, United would be better off playing Matteo Darmian, who, at least compared to the aforementioned duo, is a solid defender and reputable passer of the ball.

The terrible form of United’s defenders makes Chris Smalling, the least poisonous solution available, a likely candidate to start against Chelsea. In fairness to Smalling, if there were any type of striker that he is suited to marking, it would be target man Gonzalo Higuain.

Lindelof’s form has tailed off after what has been a consistent campaign, but he remains one of United’s most important players and must start as a result.

Likely United’s player of the season and deservedly so, Shaw is a certainty to start and has comfortably silenced any claims that he will not be Solskjaer’s preferred left-back next season.

While his future is uncertain, Herrera has still been an incredible servant to the club and is particularly needed in a match of this nature. Perhaps some of the speculation around his future stems from the fact that United managers have tried to replace the Spaniard year after year, but in a match where grit, determination, pressing, and man-marking is need, Herrera could be particularly important.

McTominay’s seemingly unexplained exclusion from the past two matches is baffling to say the least, considering that he has comfortably been United’s player of the month in this terrible patch. He starts as the anchoring midfielder and will be tasked with preventing the runs of Chelsea’s two advanced playmakers.

Pogba starts in a midfield three here, but not his usual role; the Frenchman must be played deeper if he is to get on the ball and disrupt the pressing game of Sarri’s Chelsea. Pogba has effectively man-marked N’Golo Kante in the past and gotten the better of him; moreover, if he has more time and space on the ball in deeper areas, he can start attacks more effectively.

The Portuguese defender’s presence in the back line is questionable to say the least, but in an attacking role, he provides width that United do not otherwise have, as well as versatility; should Solskjaer’s preferred 4-3-3 not yield results early in the match, Darmian can tuck into centre-back with Dalot continuing the match at wingback.

Lukaku, like Smalling, starts by default here. Rashford is in the worst spell of his career at the moment and likely due to a variety of fitness issues. Regardless of his qualities, there is no way he is good enough to warrant being started when out of fitness and form at 21, not for the team and not even for his own development. Feed the ball out wide to Dalot and Shaw, and Lukaku will be a solid target in the middle.

Considering the attacking form of every single forward at the club right now, it is entirely ridiculous that Martial has been getting exponentially more criticism than the others. The truth is that he is the only playmaking forward at the club, regardless of his frustrating spells, and he bagged an excellent brace against the Blues earlier this season.