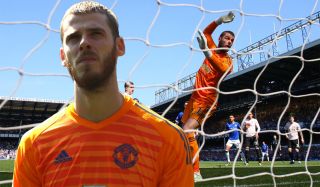 The Manchester United goalkeeper hasn’t been at his best this season and after committing howlers in the last three games, questions have been asked about De Gea and whether it’s time to drop the goalkeeper.

Ole Gunnar Solskjaer trusts the Spaniard and right said De Gea has been United’s best player for the past few years.

Mirror journalist David McDonnell was at Solskjaer’s press conference on Friday morning. He quoted the United manager responding to a question about dropping De Gea.

Solskjaer says he won’t drop De Gea, despite his recent poor form: “No. Not at all, because I trust David. For me he’s been the best player United have had last six or seven years and going through tough patches is part of a footballer’s career.” #MUFC @MirrorFootball

He is going through a difficult period at the moment – ever since the World Cup last summer – and needs to get his career back on track.

We don’t know if the contractual situation is causing havoc or not… We just want to see De Gea back to his best because not long ago he was the best goalkeeper in the world.

So, a big question on De Gea answered. It sounds like he WILL be starting against Chelsea on Sunday.