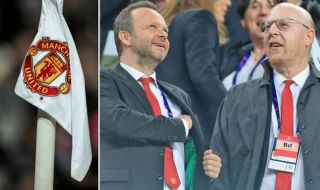 If ever there was an image synonymous with the state of modern-day Manchester United, it was the one of water pouring from the Old Trafford roof after a pre-derby thunderstorm flooded the stadium.

It has been that way for several years, and clearly, it is not only the playing sides of things in urgent need of investment and open heart surgery. The entire place needs a facelift but has been left to decay. It was yet more evident at the abhorrent, criminal neglect of the Glazer regime as they continue to run the club into the ground.

The hole in the roof was an ironic reflection of the state of our club: rotten from the very top and no-one doing anything to change it. Attempting to wipe up the puddles, stadium staff were left with a job akin to that facing Ole Gunnar Solskjaer: the equivalent of fighting a forest fire with a water pistol.

United’s team is springing more leaks than that Old Trafford roof, with some of the culprits the usual suspects and others coming late to the party – our coaching structure and players are c**p, results are at a 57 year low, the club is in freefall and the only ones that care are us, the long-suffering fans. Attention needs to be paid not to the effects but instead the underlying cause.

City brutally demonstrated the chasm in class between a hyper-modern, upwardly mobile and forever evolving team and club and one that has fallen into a state of shambolic disrepair. Old Trafford was once the leader of stadium redevelopment, the envy of the world and one of the planet’s greatest sporting theatres. Whilst the Etihad, like its tenants, is subject to an almost state of upgrade and redevelopment, Old Trafford is tired, outdated and showing its age. Whilst everyone around us has moved forward, the ground remains etched in a time warp.

As Old Trafford has remained pickled in aspic, so the rest have been playing catch up. Arsenal have the Emirates, Spurs have unveiled their sparkling, glitzy new state-of-the-art White Hart Lane 2.0 and Chelsea have plans for a super stadium at Stamford Bridge. Liverpool and City have increased their capacity – United’s lack of investment at every turn is as indicative as it is damning. At United, under the Glazers ownership, everything is focused on the present and not the future. All initiatives are business and money orientated, upping the revenues from a plethora of partnerships in order to scale down the debt.

These owners don’t give a s**t. They have not paid a penny of their own money into United, preferring to scrimp off others to pay off the cost of buying the thing. Blessed with taking on a model that was, at the time, a market leader, they have sat back and watched it get overtaken and left behind in all areas. While the rest of the game has invested and improved, Old Trafford’s roof has remained unrepaired as the sun has shone.

P.S. Give Daniel Taylor’s piece a read in the Guardian on the Glazers’ neglect of Old Trafford. One of the best football writers on an important issue.