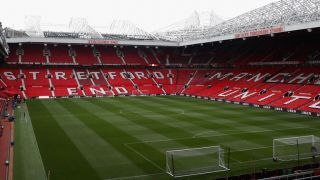 In the hours preceding the derby clash with the now not so much ‘noisy neighbours’ but rather ‘neighbours from hell’, dark clouds were gathering over Old Trafford and ultimately the heavens unleashed a biblical downpour.

Within minutes social media was awash with a video showing water cascading from the quadrant roof over the ageing stadium. This stark image should send a dark shudder through the heart of every passionate Red. The message is clear, the club have failed to ‘fix the roof when the sun shined’ and now fans are paying the emotional price.

Whilst pundits may point to players who may not be good enough, or worse those who may not be trying, the truth is there is a fundamental structural problem at United that goes well beyond what is happening on the pitch. A decay that has now permeated to the very foundations of the club, to the extent it seems no longer capable of stemming the flow.

Many may point to the ownership of the club, who have failed to develop the stadium and keep up with the top teams in Europe, which means we are playing catch-up not just with facilities but in many facets of the sport. It is telling that it is only this season that United have seen fit to develop a woman’s team well after the vast majority of our fiercest rivals. This in itself is perhaps indicative of a culture that is behind the curve that is not leading and will now have to dig deep to bridge the gap.

In the aftermath of the Mourinho debacle, the United hierarchy sent out a very strong message that it was going to return to the traditional ethos of the club in a bid to restore former glories. The appointments of Solskjaer and Phelan were intended to steady the ship and for several months that looked to be happening until recent weeks when the floodgates have once again opened and the tide has turned in a very negative direction.

Ole undoubtedly now has a very tough job on his hands. Fundamental change is required at United and it needs significant investment on and off the pitch. Fans will buy into looking towards traditional values to move the club forward but not all of the problems can be solved by fixating on the past. Yes we must produce an attacking brand of football and keep faith in youth, but this club must be a leader again whether it be in the science in the sport or the development of the infrastructure, in order to excel we need to be on the leading edge and under the current regime that may not be possible.

Any visitor to Manchester will be acutely aware of the amount of development going on in the city. The skyline seems to be changing from one month to next and the cityscape is punctuated with cranes working on the latest building project. In stark contrast, one place that you will not see such development is Old Trafford and that needs to change and change quickly it must. A two-nil home defeat to our nearest neighbours is indeed a bitter pill to swallow, but it is as nothing compared with the problems to follow if the systemic inertia is to continue. A clear focus is now required to develop the club and that means truly investing in the future. Those behind the scenes who are really at the helm at Old Trafford need to ask themselves honestly if they are capable of delivering and returning this great club to where it belongs.