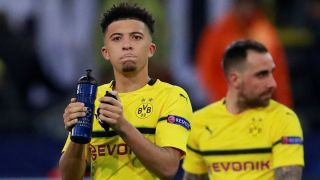 Manchester United are reportedly ready to pay as much as £155 million to seal a deal for Borussia Dortmund sensation Jadon Sancho.

The England international just had a remarkable breakthrough season in the Bundesliga and it’s no wonder so many big clubs seem to be chasing his signature, though he’s mostly been linked with a move to Old Trafford.

It’s great for United fans whenever the club is linked with an exciting prospect like Sancho. They should always be looking to sign the best talent in Europe.

The Independent have previously linked with the Reds with Sancho in a deal worth approximately £100m, but reports elsewhere now claim he will cost most to prize away from the German outfit.

That’s were a piece from Don Balon comes into the equation. Albeit a questionable source, they suggest Dortmund want as much as £155m for the 19-year-old.

This season, the BVB winger has scored 11 goals and recorded 13 assists, as per WhoScored, and they are exactly the numbers United lack on the right flank.

United have nobody capable of playing on the right that can deliver those goals or assists. That sort of addition would make the Reds more potent in front of goal, with better delivery for whoever plays as centre-forward next season.

So, should United go all out to sign Jadon Sancho this summer?